The Animals
THE REPRESENTATION OF ANIMALS IN ITALIAN AND EUROPEAN PAINTINGS

Animals have always held a privileged position in the history of humanity and, as a result, in artistic representations.

From the very beginnings, human beings have, in fact, felt the need to depict in detail what surrounded them, what struck them with its beauty and constituted their main source of sustenance.

“From the very beginnings, human beings have felt the need to depict what struck them with its beauty.”

Images of Animals in Art History

Already the Egyptians, ancient Greeks and Romans faced the depiction of animals with scientific rigor and naturalistic precision.

In the Middle Ages, animals entered the world of art with full force (consider, for example, miniatures, column capitals and Pisanello’s drawings); even more, during Humanism, animals became an actual classic of art: Durer and Leonardo da Vinci’s prodigious naturalistic-scientific drawings can deservedly be considered precursors of zoological and modern illustration.

And again: a few centuries later, at the turn of the Nineteenth and Twentieth centuries, animals were the protagonists of paintings and works of art like never before: Gaugin, Picasso, Marc, Balla represented them as vital forces able to move and animate nature.

The Representation of the Horse

The animal most frequently represented in paintings is undoubtedly the horse. Its mighty and dynamic image is, in fact, deeply rooted in the traditions, myths and memory of all the peoples of the Earth, often endowed with symbolic undertones.

The meaning of the figure of the horse varies greatly among different cultures, and sometimes even takes on magical connotations. In general, however, the horse represents movement, freedom and beauty.

This is why, already in the Renaissance, the horse was the protagonist of a great many paintings. Not only in Raffaello’s atelier, but also Paolo Uccello, Leonardo, Rubens and Caravaggio interpreted the equestrian subject according to the culture of their time.

Later on, in 1800, David restored the noble role of powerful ally to the horse in Napoleon Crossing the Alps, depicting Napoleon as he prepared to perform yet another heroic venture riding his faithful Marengo. 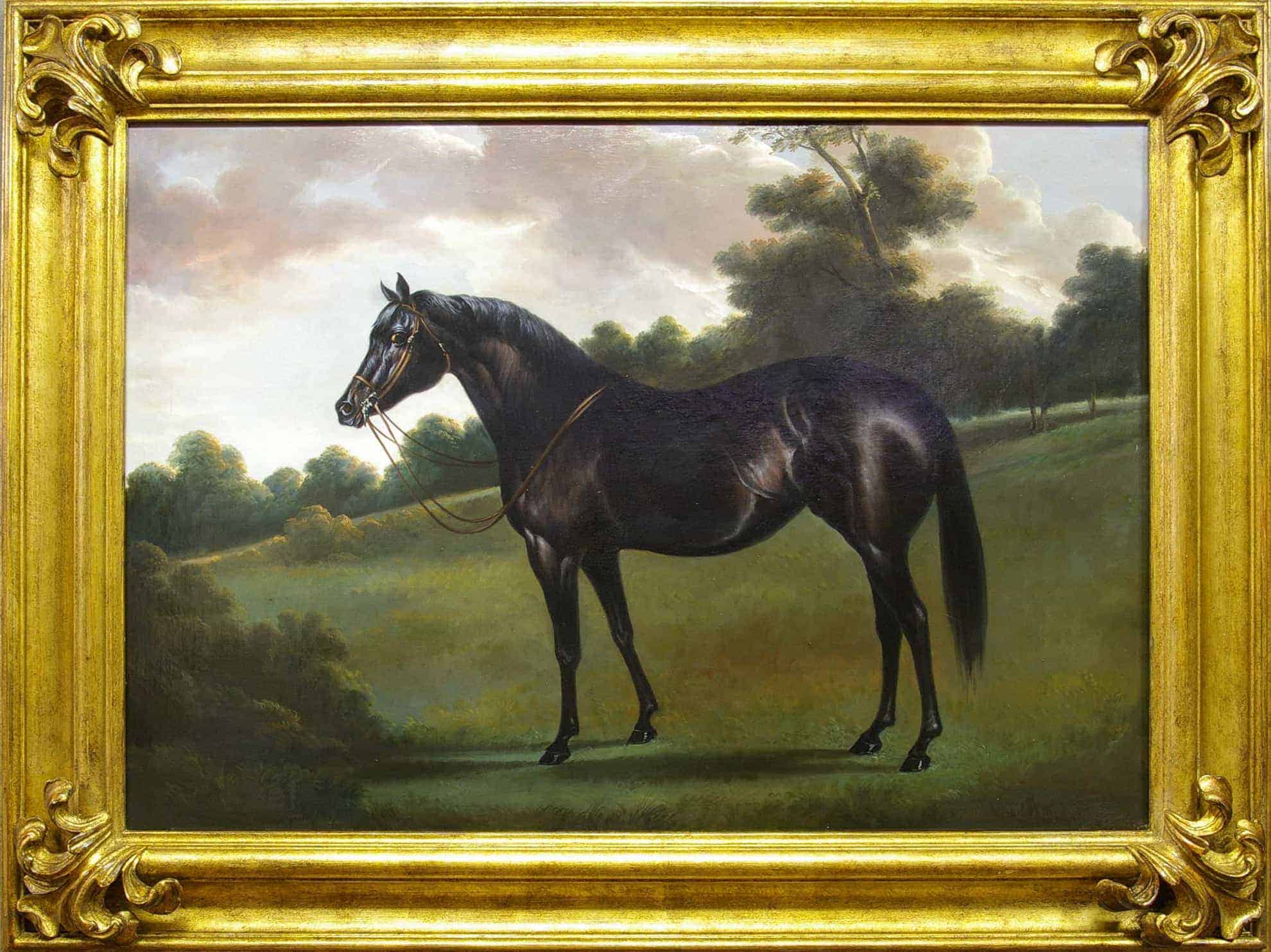 George Stubbs’ interpretations are truly masterpieces: his horses, rich in detail, are mostly depicted at rest.

But the horse is a work companion even for Fattori and Degas. The latter, in particular, during the second half of the Nineteenth century, studied races at the hippodrome, one of the pastimes of Parisian society at the time.

The Twentieth century, instead, with its Avant-gardes, depicted horses according to different pictorial styles: from the energetic Futurism (Boccioni represented the horse as wild and dynamic) to the static metaphysics of De Chirico, who set the animal in the calm of an indefinite time, all the way to Picasso’s Guernica, where the horse became a symbol of the Spanish population, worn out and distraught by the civil war.

“Its mighty and dynamic image is deeply rooted in the traditions, myths and memory of all the peoples of the Earth.”

Annibale Esposti’s Animalier collection aims to represent in its paintings the elegance, the power and the boldness of the Arab horse, both in action and at rest, and proves that even today artists in tune with the pictorial tradition continue to render vital and creative the images of these animals. 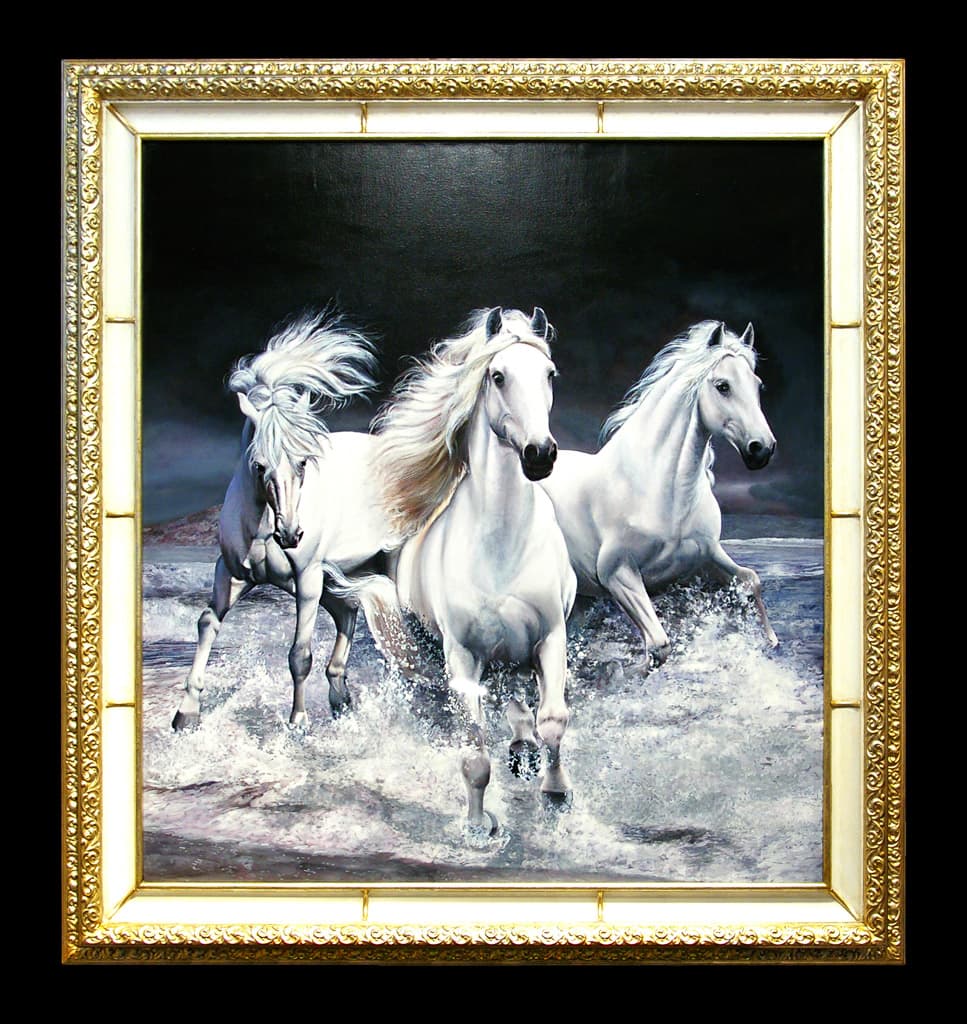 The symbolism connected to animals in contemporary art is also affected by the artists’ attitude towards nature, which now is much freer than in the past: each artist offers his own vision of the world and his own value system, bringing onto the canvas the anxieties of human beings between the Nineteenth and Twentieth centuries.

So in this period the fairy-tale-like and often humanized animals of Chagall, the fierce ones of Henri Rousseau, but also the extremely famous monkeys of Frida Kahlo, and Picasso’s various versions of the ox all appeared.

In Annibale Esposti’s contemporary collection, the artists engage with the representation of animals very freely.

The paintings are no longer made using traditional techniques such as oil and acrylic, but rather with special mixed techniques, various types of materials, and sometimes the employment within the works of semi precious stones and crystals.

The jaguar and other animals thus become the undisputed protagonists of the paintings, enveloped in a new space of trend and value. 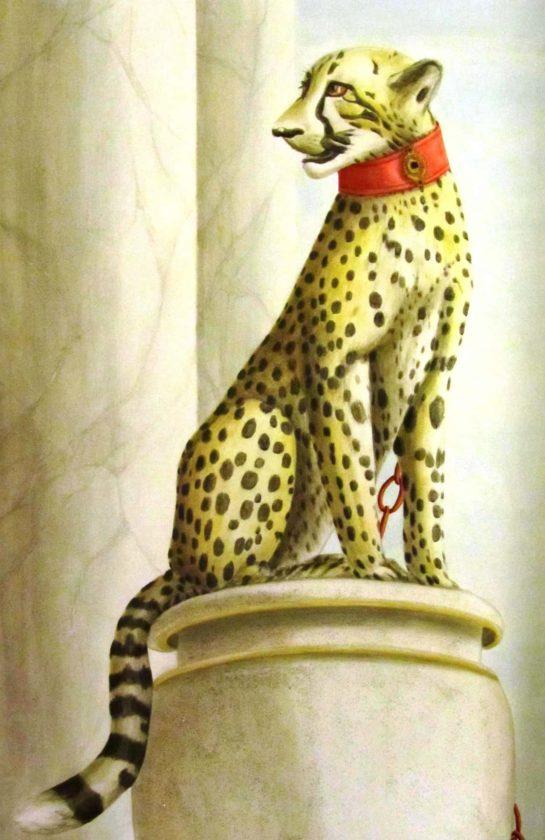 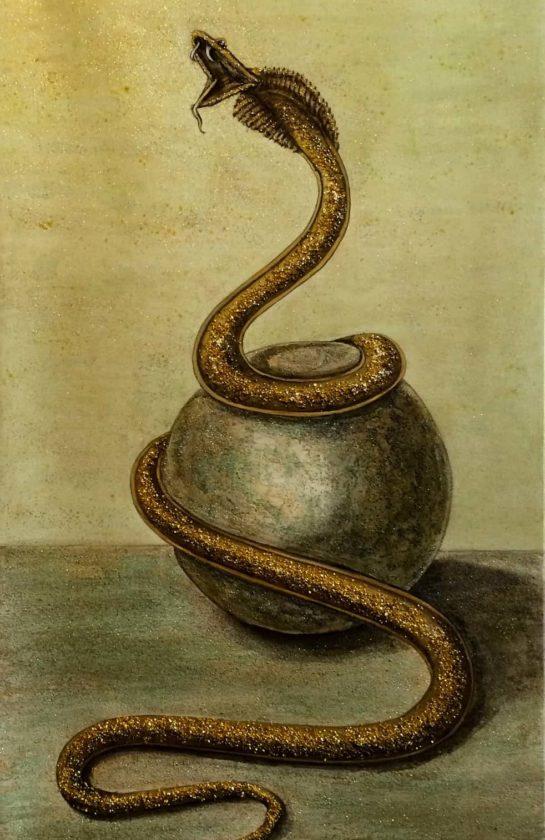 Since 1908, Annibale Esposti has been offering Italian paintings made in Italy for luxury interiors. Thanks to an in-depth knowledge of style and matter and an incessant and passionate pursuit of beauty, in its Italian handpainted artworks, the company expresses an original synthesis of extraordinary elegance and surprising charm.